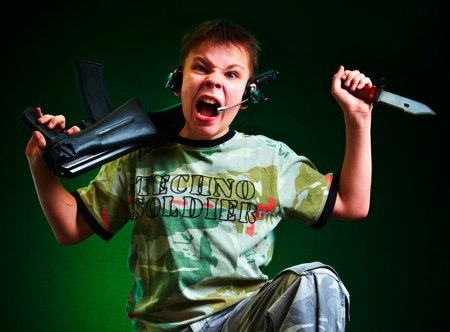 In a pre-industrial world, a young boy would learn a trade under his parents in a sort of familial apprenticeship. By the time he was a young man, he would be expert in a particular field, providing basic financial security. Such an early economic foundation would allow him the freedom to pursue higher learning, instead of being solely focused on mere survival throughout his adult life. This was one of many wonderful aspects of pre-industrial society.

But, times have changed. Many parents today, in our consumption-mad society, maintain a semblance of human virtues and values so entirely eroded by a corrupt educational system that mere sentimental affection combined with unnecessary plastic novelties become a sufficient gift for one’s progeny.

To witness millions of kids whose faces are glued to the screen of their pocket gamer, those precious human minds getting absorbed in complete non-reality, evokes mournful feelings for transcendentalists who seek the essential meaning of human life, as more intellectual casualties of consumerist industrial warfare take place.

You watch the kid just roll around on the floor, drooling to a video game screen totally distracted from learning anything meaningful what so ever, and uncomfortably squirming around awaiting personal attention as he is given his daily medicine in the form of complete intellectual distraction. The video game console is designed to suck up all their time, diverting them from the time they could be spending learning the beautiful truths of life and visiting great subjects such as art, philosophy, history, religion, and not to mention learning a practical work skill.

Parents in the other room are their watching “reality” TV as the brainwash program to segregate the members of the household beautifully and scientifically unfolds. The irony is that the parents actually feel a sense of accomplishment, that they were able to successfully able to divert their children’s minds. Because, the real world is actually scary and harsh, and to allow the children such reality denying comfort is actually considered laudable from their point of view.

And, how dare you tell such parents to introduce the kids to stark reality so early in life. The programmed parental response is, that “They are just kids, let them enjoy the fantasy. Later in life they will have plenty of time to learn about life in the real world and, thus they will go to school so they can get a job, and continue this bleak tradition. ”

Its as if they assume that kids don’t eventually grow up and become adults, and how the time spent as a child seriously affects thier outcome later in life. This is what this materialistic society is doing to people. It keeps people distracted in a under-developed child-like emotionally frozen state, killing their inner drive to seek knowledge and the truly thrilling quest of understanding our spiritual identity.

How many Batman movies and Spiderman movies are they going to make, that millions of child-like adults, line up, crowding the movie theatre to pay homage to a washed-up fictional hero?

Furthermore, are the video games that are coming out merely childish entertainment, or are they doubling for much more…

Actually there is a new shooter video game that is turning heads of Occupy activists. The game’s story line depicts a domestic terrorist attack staged by individuals who sound sympathetic to the 99 Percent movement. Sound like an interesting plot?

Here are a few quotes from a review in December issue of the magazine Game Informer about “Tom Clancy’s Rainbow 6: Patriots,” a game that is due out in 2013 for Xbox 360, PlayStation 3 and PC.

“And why wouldn’t they be? With an exponentially expanding debt, crippling forclosures, corprate bailouts, degrading infrastructure, dwindling job market, and widening income gap between the have’s and have not’s, it’s getting harder to believe politicians when they speak of American exceptionalism as if it were a fundamental truth.”

“America’s volatile political climate serves as the jumping-off point for Rainbow Six 6 Patriots. The Latest game in the storied tactical shooter series eschews the exhausted Ruassian, Chinese, and Middle Eastern crises so common in contemporary shooters and challenges gamers’ perceptions by placing them in the roles of the elite tactical unit, the homegrown terrorists, and the civilians caught in the crossfire. DO YOU HAVE WHAT IT TAKES TO PULL THE TRIGGER ON A FELLOW CITIZEN?!”

“Hey Informed Gamers…we now have have the “smarter” “issue embracing” “game” you’ve been waiting for…shooting US civilians – constitutionalists and patriots no less. But let’s not be judgmental & make a ruling toward the obvious. We know you’re tired of shooting brown skinned foreigners, so kids, run out & buy Rainbow 6: Patriots, drink your fluoridated tap water & beverages, and start shooting fellow Americans. When you’re fully drugged & brainwashed, the fluoride providers will hand you the real weapons…”

I find it fascinating that people can be so programmed to not be able to tell the difference between entertainment and what obviously appears to be war simulation training. If the purpose in creating such games are purely for home “entertainment”, then why would the government invest $50M in making similar types of video games for combat training.

If you like playing video games such as these, go for it. It’s a free country, but don’t be fooled into thinking that such kinds of video games are simply for your personal entertainment. Television, movies, and video games have historically doubled as a form of social programming.