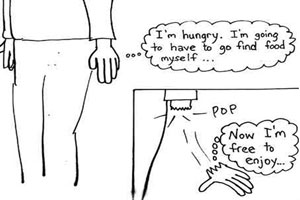 When Anarchy, Communism, Monarchy & Capitalism, Are In Love

Could radically different ideologies such as anarchy, communism, capitalism, and monarchy ever co-exist in a governing institution?

The daivi-varnasrama of Vedic India is a cultural paradigm that scientifically accommodates these four dissimilar social ideologies in perfect equilibrium under the one banner of service to the Absolute.

The problem in this nation, in regards to the class war, is the very platform on which so-called equality is situated. When equality is based upon a purely materialistic understanding of the world, the idea that a living entity is nothing more than a composition of atoms and molecules, it is almost as if one has to develop a kind of voluntary blindness to objective reality.

Looking at people, you will find much in common, but looking further it is impossible to find equality in the truest sense of the term. Why? Because, no two thumb prints are the same. No two irises are the same. Get into DNA code and you will have yourself a limitless testimony to the unique blueprint of every living thing in existence.

What about abilities? Some people, let’s face it, are good at things that others just aren’t. So, it seems that naturally some people will be able to do a service that is more in demand, which to the modern world, naturally translates into cash. Realistically, would we really ever be able to eliminate class differences in society?

Yet, there is so much talk in this country about social equality. It is our Declaration of Independence that proclaims, “We hold these truths to be self-evident, that all people are created equal, that they are endowed by their Creator with certain unalienable Rights.”

So, exactly what is it about us that is actually equal? Without this concrete understanding, the idea of equality amounts to a sort of politically correct social etiquette at best.

What all beings have in common is the living force. Though all our bodies are different, our abilities differ, and our ideals may differ, there is something that we all share in common: we are all living, conscious entities. Regardless of the body, whether you are an insect, bird, human, or animal, this commonality is trans-species; it transcends the bodily, physical designations. Each living being in this world is trying to preserve its existence and express itself in a manner that brings about its own individual well-being.

The Vedic knowledge elaborately explains the living force of each living entity as a non-material, eternal spark of divinity, irrespective of the physical vehicle (the body) it may inhabit.

Those who are able to understand this fact will agree. Now we are left with the question: where does the social equality come from?

The Body of Vishnu

In the Vedas of spiritual India, the concept of social equality is gracefully explained. In the Rig Veda, a passage known as the “Hymn of Creation” (purusa sukta) explains that at the beginning of time, the Supreme Entity existed alone. This Supreme Entity became many individual spiritual entities and, although remaining separate and complete, entered into all varieties of the existence. Such varieties, though each with separate, individual existences, still maintain their qualitative identity with the original source.

In regards to the manifestation of social division, the “Purusa Sukta” states:

Therefore, in terms of Vedic sociology, because such divinity is inherent in every living being, this is the only true solution to the problem of establishing genuine equality. The Vedic sociological science is perfected when every human being learns to perform their duty selflessly in service to the Supreme Entity, the source and pivot of all other entities.

As in the case of a human body, the hands, legs, and eyes work in conjunction with one another to successfully feed the stomach. Similarly in spiritual consciousness, social equality is able to function only with individuals who have obtained self-realization of their inherent, non-material spiritual identity eternally related with the Absolute Whole.

Each part of the gigantic social body may perform complexly different tasks; however, being attached to the same body, it would not make much sense for a limb to suddenly rebel and claim independence because of inequality due to a lesser role or variant job description of another body part.

From the Vedic sociological standpoint, we might mindfully deduce the following:

1) Brahmanas can be seen as spiritually and intellectually qualified anarchists. To practically function in the capacity duly prescribed for them in the Vedas, they really require a demilitarized ambiance wherein they may peacefully and creatively exercise their God-given right to be self-regulating, independently thoughtful people. Naturally, the independence afforded to them brings with it the highest constitutional responsibility, namely selfless sacrifice in the direct service of Godhead (HTBD). They are the representatives of the head of the Supreme Entity.

2) Kshatriyas are basically noble-minded God-conscious monarchists. They are meant to enact policy on behalf of qualified brahmanas whose only interest is the spiritual elevation of human society. They are the representatives of the arms of the Supreme Entity.

3) Vaishyas are theistic charitable capitalists. They are the representatives of the legs of the Supreme Entity.

4) Sudras are theocentric, working-class socialists or communists. They represent the feet of the Supreme Entity.

There is a place for anarchy in human society. There is a place for monarchy in human society. So also is there a place for capitalism and communism. The daivi-varnasrama cultural paradigm scientifically accommodates these four dissimilar social ideologies in perfect equilibrium under the one banner of service to the Absolute. It is simply a matter of recognizing, facilitating, and suitably balancing the needs of different kinds of people. In view of social distinctions, on the basis of diverse individual psycho-physical dispositions, it would be irresponsible on the part of any one section of society to artificially impose a single ideology upon all. This would force a state of stultification upon the social order. Similarly, encroaching upon or crippling another’s God-given station hinders the affected individual’s natural socio-constitutional development (HTBD).

Therefore, it is not necessarily the social structure, or the proposal of new political mandates that will change our society to reflect more individual equality. It is the development of a spiritual platform that the ideology of unity in the diversity may factually rest.

Freud was on to something.