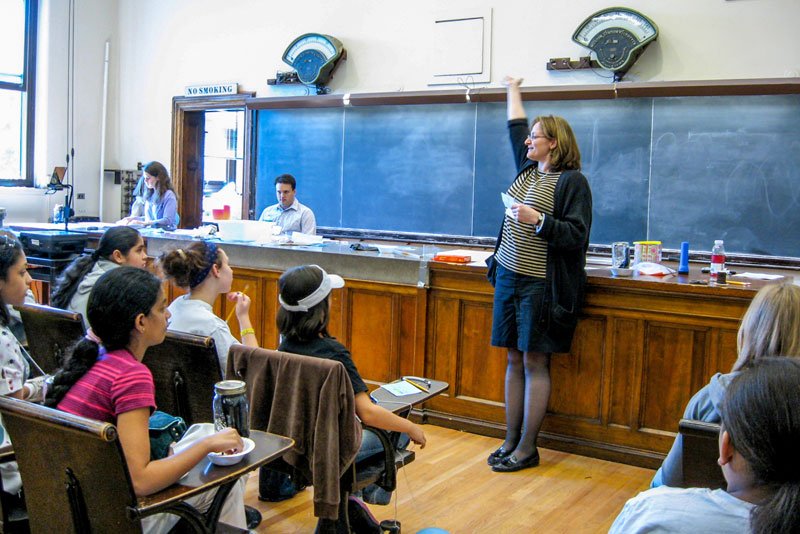 When one wants to learn physics, one must approach an authority on physics, a professor. Someone who is really smart can learn physics just by reading books and doing their own experiments at home, but even those rare geniuses are taking instructions from a professor through at least his or her books. Almost everyone else has to enroll in a university and take many different classes related to the field of physics.

Now, just what is the usual process for mastering (getting a master’s degree) physics? One must approach a learned guru, I mean a professor, and humbly, I mean respectfully take instruction from him or her.

The professor then tells the student which spiritual texts, I mean text books, to study. These texts reveal to one many difficult to understand and apply truths about the physical universe. One who understands these truths, has realization of them through experience, I mean experiments, and having done great things in the field of physics, is truly worthy of our respect.

Now, generally one has a lot of respect for the professor and the text book, and so they have faith, I mean confidence that whatever the books or the professor say is true. The student has never seen, and has little knowledge of the vast reaches of the universe, but they trust that the authorities in the field of physics have a lot of knowledge and practical experience of physics. The student also trusts that in many cases the professor has actually seen, with a telescope or microscope, spiritual realms, I mean amazing subatomic or galactic structures.

After taking instruction from the text books and the professor, and gaining a preliminary understanding of the ideas involved, one is instructed to apply the theories to reality – in other words, perform experiments. If one does their experiments properly, carefully following the instructions of guru and scripture, I mean the professor and the textbooks, then the experiments should turn out a success.

Following this process, the serious student will advance steadily in self realization, I mean getting their masters degree in the field of physics. When an advancing physicist matures in his or her field they are ready to take disciples, I mean teach students.

This is the general process for attaining a masters degree in physics, and making further progress in the field. But, what if one who has never, or only vaguely studied physics, proclaimed that they knew just as much as any senior physicist? What if they went on to say that actually everyone is just as advanced, I mean everyone has the same amount of theoretical knowledge and experimental experience in the field of physics as scientists with masters degrees and doctorates? This would be foolish. Similarly, to assume that everyone, regardless of their habits, moral character, or knowledge of spiritual science, is just as spiritual as any advanced yogi, is just not rational.

Advancing in yoga/self-realization/enlightenment, is a science just as much as any other science. In fact the process is more or less the same for mastering any scientific discipline. The guru and spiritual texts give one theoretical knowledge of reality. They tell one that if they do this, this, and that, then it will change one’s consciousness in specific ways. Similarly, the college professor and textbooks say that if one mixes these ingredients and heats them to a certain temperature for a certain amount of time, then it should produce a certain result. The difference between spiritual science and material science is simply the difference between experimenting with consciousness versus experimenting with matter.

Let’s Say You Want to Meditate

A Guide to Control The Uneasy Mind