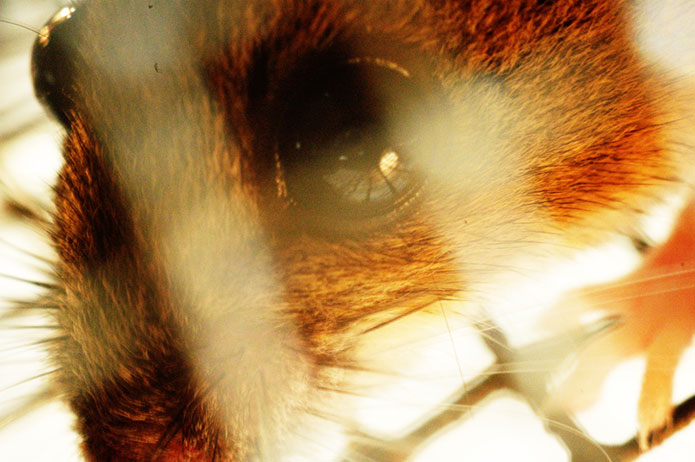 Once there was a pleasure-seeking cat and a wise mouse that lived as pets. The cat was interested wholly and solely in eating nice foodstuffs, taking long naps, fending off competitors who encroached on his territory, and enjoying lovemaking – indeed, your typical back alley feline. This cat, we’ll call him Tom, worked hard to have all these things nicely available by hustling and competing amongst other cats for long hours during the day. Although he had an arduous routine, his one concession was being able to come back home at night to enjoy his carnal commodities. The mouse, on the other hand, who also lived in the man’s house, was confined to a cage (we’ll call her Minnie) and was simply at the mercy of the owner to provide for all bodily necessities.

The mouse, who was keen and knowledgeable about life, saw the cat’s daily endeavors through the wire mesh of her cage and spoke to Tom with compassion:

“My dear friend, how are you faring? How is your peace and sanctity? I see you struggle every day to make nice arrangements for food and sex, working at the cost of your own precious time and health. Has all of this made you happy and successful? Please tell me plainly.”

Tom, resting on his side, with a voice infused with a slight purr said, “I am as happy as I can be. I have to work and struggle, but I get to enjoy too. And enjoying makes me happy. I figure, let me take advantage now because it will all be finished one day.”

“If that is true, then why cause yourself so much pain to pursue pleasure? I am being supplied automatically, and yet because you want more than what is provided by your owner, you have become frantic,” was the sharp reply.

Tom, now taking umbrage, changed his tone from a slight purr to a slight snarl. “You say this though you are confined to a cage, mouse. What freedoms do you have compared to me, who can roam freely and enjoy life as I please?”

Minnie, with an amused smirk on her whitish mouth, commented that “Although I am in a cage, my mind remains placid, but although you can travel anywhere, your mind, being disturbed, always accompanies you. I am not put into anxiety because I have faith in my maintainer, but because you think you maintain yourself, you have so much distress.”

The Rat Race of Illusion

It is a popular and easy application to use philosophy as justification, even moral obligation, for increasing or maintaining a high grade of sensuality. Popular idioms, like ‘Carpe Diem’ and ‘You only live once,’ promulgate it; celebrities evoke envy of it; religions often justify it; advertisements plant desires of it; indeed, it is enmeshed in every aspect of a culture hinged by capitalism alone. One such exemplary philosophy is that we all came from nothing and it was by accident that we were manifested, and we will become nothing once more after death.

In refutation to this ideology, if all your endeavors ultimately add to nothing or zero and you came from nothing, then why endeavor so hard? It’s all nothing anyway; and, anyone who seriously believes such a philosophy should find working for nothing to be truly a pointless pursuit.

Clearly illogical and nonsensical, the only reason for such a philosophy is to substantiate one’s acting whimsically according to one’s own desires. After all, you only have this short window of manifestation by which to act for pleasure before returning to zero status. But because you are just a zero, why place importance even on this?

Ironically, such a philosophy does not bring greater happiness or freedom – its true intention. Actually, one who takes to unbridled enjoyment becomes more inured to obeying the orders of the mind and senses, thereby losing freedom, which is evinced by the gradual degradation of the higher sentiments afforded a human being.

The Bhagavad Gita states in chapter 2:

Minnie knew that a higher authority was supplying her and instead of over-endeavoring to pursue more sense gratification; rather, she spent her time accruing wisdom, and because of her wisdom, she was content despite having seemingly less freedom than Tom. Indeed, the mind is apt to bring one misery if it is not controlled because “For him who has conquered the mind, the mind is the best of friends; but for one who has failed to do so, his mind will remain the greatest enemy” (Bhagavad Gita 6.6).

Tom may maintain his belief in the ‘zero to zero’ paradigm, but since no evidence or even inference is given to prove such a claim, and no lasting happiness derived from it, how can Tom remain sincere to such a belief? Rather, we should be real about what our intentions are, instead of using sense gratification to try to manipulate objective reality and genuine happiness like a cheap game of cat and mouse.