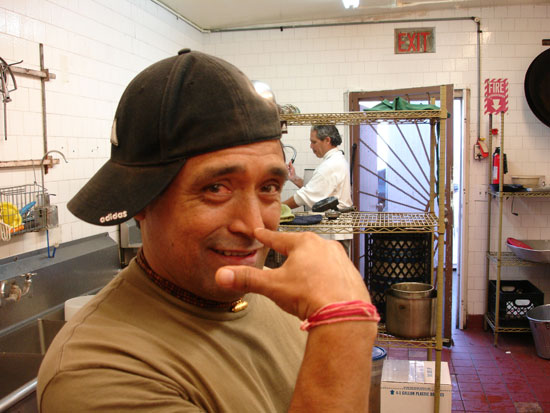 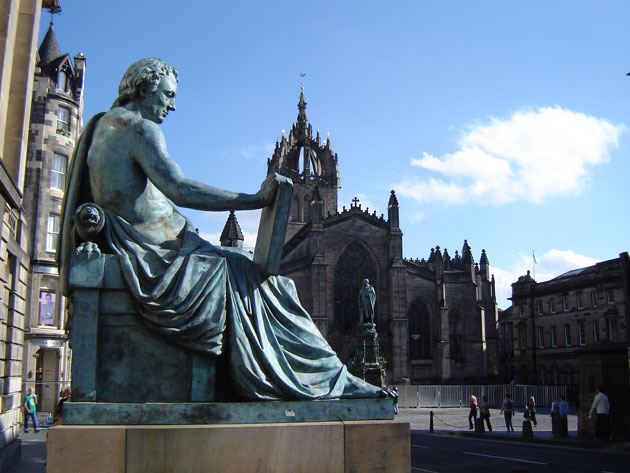 Sometime in the 1730’s a young Scottish philosopher tried, and failed, to find himself. David Hume reflected upon this experience in his first book, A Treatise of Human Nature (1739). The passage is much quoted and anthologized. I encountered it frequently as an undergraduate philosophy major, for my teachers regarded it as a watershed in Western philosophy. They revered David Hume—progenitor of the hard-nosed, no-nonsense style of empiricism they professed—and they amused their classes by reproducing in a Scottish burr a famous remark by the great philosopher’s mother: “Our Davie’s a fine, good-natured crater, but uncommon wake-minded.”

Well, sons are sometimes hard on mothers, too. That was why I had the afternoon last fall to take my two grandsons on a search for the self, some 260 years after Davie had looked in vain. This Saturday my harried daughter needed a break, so my wife and I were at her house trying to load Paramesvara (age five), Bhaktivinoda (three and a half), and all their weekend gear into our car. In the midst of a great deal of coming and going, Paramesvara and I found ourselves at one point alone together in the car. We chatted. I was struck once more by how bright this lanky, tow-headed boy was, and I wondered how much of the philosophy of Krishna consciousness he understood. I decided to begin with what Srila Prabhupada called “the first lesson.”

Making sure I had his attention, I said, “Paramesvara, do you know you’re not your body?”

“I’m not?” he exclaimed in amazement. He looked at me expectantly, awaiting explanation.

“That’s right. You’re not. You’re the soul, the spirit soul.”

He knew plenty of Krishna stories but, it seemed, no philosophy. Was he too young? His astonishment told me he was ready—my statement didn’t just go past him or bewilder him. Yet how could I get him to understand the soul? I did not want him simply reciting stock, catechistic responses that had no meaning for him.

Before I could go any further we were interrupted: “Jaga! Jaga! Help me!”

This was Bhaktivinoda, stranded on the sidewalk with a spill of paraphernalia, calling his older brother, whose in-house name is “Jaga” or “Jaga-bear.” (I can’t tell you why.) After we had packed the trunk and settled back-seat territorial disputes, Jaga went back inside to look for the trip snack-bag, leaving me alone with Bhaktivinoda, or, conveniently, “T-Node.” T-Node is a rolly-polly kind of kid with a pale, circular face that’s surrounded by a sunburst of curly hair so blonde it’s nearly white. A toddler’s lisp overlays his low, gravelly voice.

I had him alone: How would someone this young respond? Would he be interested at all?

“I’m not?” he exclaimed at once, his eyes wide with astonishment. He looked up at me, waiting.

“No, you’re not. When Jaga comes back I’ll explain it.” I began making plans.

My wife agreed to drive, and by the time we made the turnpike I was ready. I had remembered how Srila Prabhupada had taught some schoolchildren and decided to try it.

I twisted around to face the boys in the back seat. “Now I’ll show you that you’re not your body. First stick your pointing finger out straight, like this. OK? Good. Now just do what I tell you. Ready?”

They were; they were into it.

“Now point to your belly!” We all did. I led them through a sequence: elbow, eye, foot, knee, chest …

(Once they got going I stopped pointing.) I hammed it up a bit and gradually gained speed until I reached the punchline: “Now point to your self!” Consternation. Pointing fingers waved about aimlessly, eyebrows knit together in bafflement. They laughed … “What? What?” Jaga said, his finger looping around like a bottled-up fly.

“See!” I said. “You can’t point to yourself. That’s because you are not your body! You’re the soul.”

T-Node was thunderstruck; he had clearly undergone an intellectual breakthrough. His face was lit up with the wonder of discovery.

“Do it again! Do it again!” T-Node begged. We went through the sequence a few times, and each time it worked to both boys’ satisfaction. “I’m not my body,” I heard T-Node saying to himself. “I am the soul.” It seemed to sound right to him.

But I felt an unease, a mental chill, almost a presence. It was the ghost of David Hume. With suave, measured tones that nicely set off a hint of contempt, I heard the words of the Treatise announcing the position about to be demolished:

“There are some philosophers who imagine we are every moment intimately conscious of what we call our self. …”

But where, Hume asks, could we get the idea of a self from? All real ideas are based on “impressions”—on sensations, passions, or emotions. We must be able to analyze or dissect ideas down to show ultimately the impressions that produced them. If we cannot, then the so-called idea is meaningless. What impression, Hume asks, is responsible for the idea of a single, simple, enduring, unchanging self?

“If any impression gives rise to the idea of self,” Hume wrote, “that impression must continue invariably the same, through the whole course of our lives; since self is supposed to exist after that manner. But there is no impression constant and invariable. Pain and pleasure, grief and joy, passions and sensations succeed each other, and never all exist at the same time. It cannot therefore be from any of these impressions, or from any other, that the idea of self is derived; and consequently there is no such idea.”

Yet don’t we need a self to possess or unify all our particular impressions? Well, where is it?

“For my part,” continued Hume, “when I enter most intimately into what I call myself, I always stumble on some particular perception or other, of heat or cold, light or shade, love or hatred, pain or pleasure. I never can catch myself at any time without a perception, and never can observe anything but the perception.”

A person may attest that he perceives “something simple and continued, which he calls himself,” Hume says, “though I am certain there is no such principle in me.” Setting such “metaphysicians” aside, Hume affirms that humans “are nothing but a bundle or collection of different perceptions, which succeed each other with an inconceivable rapidity, and are in a perpetual flux and movement.”

Haunted by Hume, I kept on conversing with the metaphysicians in the back seat while the Pennsylvania croplands poured away behind them. They were learning to discriminate between matter and spirit. I held a rubber ball in my hand and beat it with a fist.

“See? I can hit it over and over again—hard—and it never goes ‘Ow!’ It never cries. But if I hit you”—they bobbed away from my slow-motion punch—”you’ll feel it. You’ll cry. That’s because there is a soul—you—in your body. But there’s no soul in this ball.”

“This morning Jaga hit me and made me cry,” T-Node said.

“Even ants or spiders,” I added.

T-Node looked down guiltily. He’s been known to step on ants on purpose.

How could Hume have missed himself? Was he being willfully obtuse? Imagine him conducting an inventory of his mental contents, like an auctioneer appraising the contents of an estate up for sale. He walks through each room, examining each object. Picking it up, setting it down. Looking for something in particular. “Is this myself? Is this? Is this?” After an exhaustive search, he reports—truthfully enough—that he didn’t find it.

But who is looking? Who is inspecting this memory, this joy, this love, this fear, this regret, this ambition, this or that train of thought? David, you could not find your self in all that because none of that, taken separately or all together, is your self. The self is not the seen but the seer, not the experience but the experiencer. You are not even David Hume, but rather the experiencer of being David Hume.

Teaching my grandsons had given me a new insight into the Treatise. Like T-Node and Jaga, David Hume had been playing the pointing game. T-Node and Jaga played by pointing to different parts of their bodies, while David played by pointing to different parts of his mind—the subtle body. I could take Davie through it point by point, running through the inventory of mental goods, until: “Point to your self!” And the indexical Human finger wavers, finding no object. “See!” I’d say. “You’re not your mind. You’re the spirit soul.”

For we are no more to be identified with our minds than with our bodies. The mind belongs to the category of the not-self as much as the body does. Both mind and body are material, the former being merely finer or subtler than the latter. Vedic seers know this, but Western philosophers have conflated the spiritual and the mental; “mind” and “soul” are synonymous. David Hume discovered in the Treatise that the mind was not the self, but he drew a false conclusion: there was no self, no soul, at all.

My grandsons were doing better:

“What happens if I attack the soul with ninja swords?”

“What happens if I drop a huge rock on it?”

“What happens if I put a blowtorch to it?”

They were good students. They made me wish I had Davie in my class along with them. I thought about that. Since the presence of such a great philosopher might intimidate me, I would want his mother along too. She sounded like a formidable woman, and she seemed to know her son.

Why More Is Less

Questioning the assumptions of society.