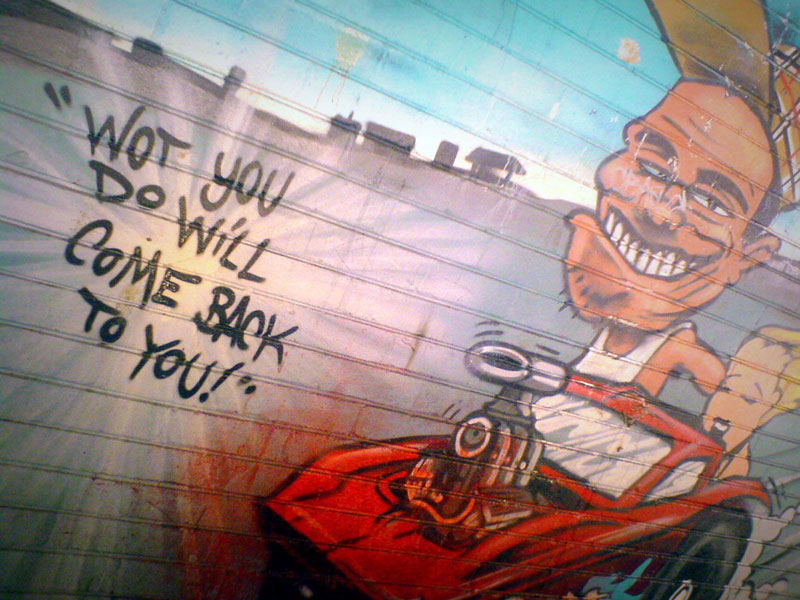 The word karma is often used by aspiring spiritualists, and why not, karma makes sense. Let’s look at the ancient Vedic texts of India, where the idea of karma originates, and what they have to say on the subject.

First let’s look at, “Why do “bad” things happen to “good” people?” Well, the simple answer is karma and reincarnation. Suppose an innocent looking little kid is regularly picked on at school by a bully. According to the law of karma this seemingly “bad” act is occurring because the “innocent” child bullied other small children in his previous life. Karmic law is perfectly just and infallible. The child that is getting harassed was placed in that particular situation by universal law of justice. So the child’s punishment is not bad, it’s just, and the child isn’t completely innocent; it is guilty of similarly rude behavior that he had committed in a previous lifetime.

Secondly, this child under discussion is not a child at all; it is an eternal spirit soul who happens to be in a human child’s body in this lifetime. We as spirit souls are placed in different bodies, on different planets, at different time periods, and in various pleasant or unpleasant conditions all based on our previous actions, or in other words our karma. If one has a beautiful or an ugly body, if one lives in hellish or heavenly circumstances, if a person is rich or poor, it is all because of one’s karma.

“Life is eternal, love is immortal, and death is only a horizon; and a horizon is nothing save the limit of our sight.” – Rossiter W. Raymond

According to the Vedic texts, one important concept we should live by is complete forgiveness. This idea that we can and should forgive everyone comes from understanding the law of karma. If someone wrongs us it is because we have wronged someone else in a similar fashion. A cosmic force greater than both, us and them, has directed them to cross paths with us and deliver our karmic reaction. So the advanced transcendentalists forgive everyone for every offense, because they know that they are getting only what they deserve and nothing more. If it wasn’t one person giving us the reactions to our bad karma, it would be someone else. So if we retaliate or try to get revenge when people upset us, then we create more bad karma that must be paid for later.

A possible misunderstanding is, if everyone is getting what they deserve, then shouldn’t we let them get what’s coming to them and not feel compassion? … I have done things in the past that I wish I hadn’t. I would want a spiritually advanced person to have compassion on me, and help me to better myself.

One question you might have about all this is, “If a person is directed by karmic law to punish us, then are they just robots being completely controlled?” The answer is no. We all have free will, so the person who is mean to us was probably in a bad mood that day and was just looking for someone to take it out on. We happened to be nearby, and happened to have the karmic reaction of someone being rude to us coming, so we and the person in a bad mood crossed paths. If a person desires to commit any bad or evil act, there is always someone who deserves such a punishment nearby. However, this is not a license to be mean and say “Well, they must have had it coming to them.” Since we have free will, if we desire for a victim to be brought to us, even if higher powers made the arrangement and the person deserves it, we still have to pay for our bad behavior. We can choose at any time to stop behaving badly, and then we won’t be used to deliver other’s karmic reactions.

Another possible misunderstanding is, “If everyone is getting what they deserve, then shouldn’t we let them get what’s coming to them and not feel compassion?” Well, I would say that we all have behaved badly at some point in our life. I know that sometimes I snap at people, and I have done things in the past that I wish I hadn’t. I would want a spiritually advanced person to have compassion on me, and help me to better myself. Compassion is one of the main characteristics of saintly people from any tradition, and the Vedic texts recommend that we develop feelings of compassion for other living beings.

Forgiveness is the answer to the child’s dream of a miracle by which what is broken is made whole again, what is soiled is made clean again. – Dag Hammarskjold

Unfortunately everyone is forced to suffer or enjoy the results of their karma from this and previous lives in this lifetime, but even if there is some enjoyment there will inevitably be some suffering also. The Vedas tell us that there is no pure happiness in the material universe; that we shouldn’t dabble in karma, whether good or bad, at all. The solution is to become transcendental to material karmic law altogether. When we serve the supreme spiritual cause instead of our narrow personal, family, or national interests, then we transcend the material plane of existence and its karmic laws characterized by concentrated and extended selfishness. If one is a Muslim, Christian, Buddhist, or a member of any spiritual tradition, one is advised to seriously follow the universal scriptural injunctions from their particular tradition, about what to do and not to do. I personally follow the Bhagavad Gita, one of the most known and important Vedic texts, which clearly explains how to transcend material consciousness. However, whatever tradition one may follow, if one cultivates forgiveness and compassion and lives for a higher spiritual purpose, one can stop the chain reaction of karma forever.

SMS Your Cares Away?