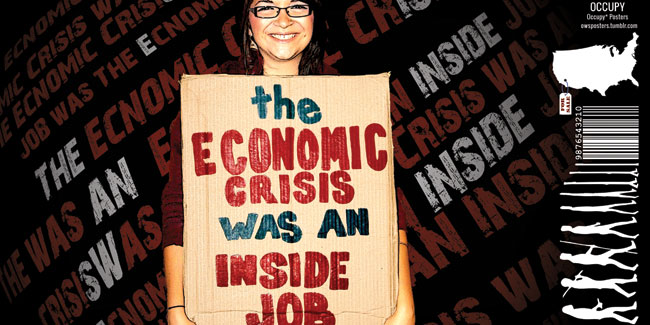 Did they get you to trade cold comfort for change?

There is a lot about the Wall Street occupiers and their message one can sympathize with. The commonality of their ideals is so ubiquitous that it makes it natural for many to identify with the movement. Even I, a monk who is keeping somewhat of a distance from much of what is going on in the society, am feeling a dose of attraction. As a friend and fellow monk of mine wrote, commenting about the Occupy Wall Street movement:

“I feel the pain of my own parents’ financial troubles. I feel the pain of so many people from the wasted city of Detroit, where I grew up and honed my roots. I feel the pain of people just like me, just like you, who have found that precepts of “life, liberty, and the pursuit of happiness,” as guaranteed in The Declaration of Independence, are a cruel joke laid upon them. I look at many of the young people saddled with college and credit-card debt and I also feel gratitude for my current shelter as a monk, which has allowed me to keep a certain space from being plunged into that kind of angst; an angst which is visceral and existential all at once. Most of all I feel that there are people who are done with being stuck with the survival of the fittest. The 99% are people who are sick of being manipulated and exploited by the 1% who, by all appearances on the surface and underneath, are rigging the system and benefiting beyond any sense of means and decency by a dependence on the inherent shocks and chaos programmed into the system itself.”

By now, similar “Occupy Wall Street” protests have spread to 36 American States. Even the people in England and Canada have joined in.

On Friday, October 7th, 2011, I headed to downtown San Diego to hang out with the San Diego occupiers and to possibly connect with some interesting, progressive-thinking individuals. I met a lot of folks who were just the type I admire: exuberant, thoughtful, creative, aggressive yet gentle, and happy.

Author (on the left) talking with & interviewing San Diego occupiers

The first person I interviewed was Bob. He was with the International Socialist Organization. Bob said, “We have seen ordinary people being hammered down. Right now is a period of economic turbulence, one in which ruling powers that be have decided that ordinary people should pay for it rather than those who caused the crisis – the people at the top of the society.”

The two of us chatted about socialism. I see socialism as something very human, natural, and noble. We both were marveling at how the 99% of the American populace were cheated for years by the 1%. The deception is so deep that even now most of the 99% folks equate socialism with something demonic, associate it with former communist Russia, and look to support capitalism, the system which clearly favors the 1%. Besides that, capitalism is a runaway train of materialism. It forces everyone to severely compete for their market share. It is a “no mercy” system where everyone is trying to step over everyone else. It is brutal and needlessly disturbing. People should rather learn to live simply, quiet their otherwise disturbed minds, and go deeper into life, rather than just skimming on the surface.

Another fellow I met there was expressing his disapproval of “the corporate influence over government and humanity,” as he put it. He had another good thing to say: “This country thinks that competition is good and that infinitely consuming the planet’s resources is not having any effect on us whatsoever. We, rather, want to propose that instead of putting profit before people, we put people before profit.”

“Another socialist idea,” I thought. Cool.

“We don’t think for ourselves a lot of the time. We think under the terms we’ve been told to think about. We have all these thoughts that are not ours.” a girl standing next to us joined in the conversation.

I interrupted, “However, don’t you think that is inevitably happening in every society? Whenever people try to organize themselves, group members tend to conform to the group’s ideals.”

At this point I remembered something George Orwell wrote in his work 1984. To anyone who knows anything about the history of this world, this should sound very familiar.

“Throughout recorded time there have been three kinds of people in the world: the High, the Middle, and the Low. They have been subdivided in many ways, they have borne countless different names, and their relative numbers, as well as their attitude towards one another, have varied from age to age: but the essential structure of society has never altered. Even after enormous upheavals and seemingly irrevocable changes, the same pattern has always reasserted itself, just as a gyroscope will always return to equilibrium, however far it is pushed one way or the other. The aims of these three groups are entirely irreconcilable. The aim of the High is to remain where they are. The aim of the Middle is to change places with the High. The aim of the Low, when they have an aim—for it is an abiding characteristic of the Low that they are too much crushed by drudgery to be more than intermittently conscious of anything outside their daily lives—is to abolish all distinctions and create a society in which all people shall be equal.

Thus throughout history the same struggle occurs over and over again. For long periods the High seem to be securely in power, but sooner or later there always comes a moment when they lose either their belief in themselves or their capacity to govern efficiently, or both. They are then overthrown by the Middle, who enlist the Low by lying to them that they are fighting for liberty and justice. As soon as they have reached their objective, the Middle thrust the Low back into their old position of servitude, and the Middle themselves become the High. Presently a new Middle group splits off from one of the other groups, or from both of them, and the struggle begins over again. Of the three groups, only the Low are never even temporarily successful in achieving their aims.

Throughout history there has been progress of a material kind. But no advance in wealth, no softening of manners, no reform or revolution has ever brought human equality an inch nearer. From the point of view of the Low, no historic change has ever meant much more than a change in the name of their masters.”

As I was thinking about this passage, my thoughts were interrupted by another guy standing in our small circle. He was saying that we should not just blame the rich because everyone makes decisions based on options given by our environment. Therefore we should strive to change the environment in order to change everyone, including the rich.

I was not too happy with how the conversation was developing. I felt we were dwelling too much on the details. Details merely run on the platform of principles; so detecting principles is way more important for me. The details of who stole what and how to prevent future theft, even though having its own merit, was somewhat of a superficial plane in my opinion. Principles first, details later. Otherwise you may end up successfully climbing a ladder just to find out that the ladder was resting on a wrong wall.

I asked everyone that was gathered if what they deliberated on was to be considered details, what would be the principles? Not too many liked this question. Some left the circle. In my experience, this often happens. Every time you try to get down to the deep principles, as if sensing a devil, some folks flee. Certain people are just determined to remain on the superficial platform. I wonder why? It might be a psychological thing. It might be that digging deep down to where the principles lie is to run the risk of discovering that which will demand our own personal change. Unless we are sincere seekers, we may opt to give up the truth in exchange for comfort. Pink Floyd sang, “Did they get you to trade cold comfort for change? Did you exchange a walk on part in the war for a lead role in a cage?”

One of the guys who stayed with the conversation, a tall 22 year old with curly, long hair, attempted to answer the question. Answers following questions and questions following answers, we were getting deeper and deeper into the issue. Finally he said that the thing he was uncomfortable about, the thing he was rebelling against, was injustice, inconsistency, and lies. I said that physical pleasures are extremely seductive. Money and power, besides providing for such pleasures, also tame the beast of fear for bodily comfort and security. Remembering the above mentioned quote from George Orwell, I asked, “Even if the regime is toppled and replaced with a new one, a good and moral one, how do we make sure they don’t get contaminated by greed for money and power?” My conversation partner, obviously knowing that I am a monk and therefore focused primarily on internal, spiritual development, understood where this train was going. He lowered his head, for some reason, and said with a soft voice that the most important thing is individual internal purity and loyalty to the truth. That is the thing that is seldom taught anywhere in the modern society, and almost never instructed on a large scale and in an organized fashion. If one is rebelling against injustice, inconsistency, and lies, one should feel morally obliged to wipe those out of one’s own heart first. Dr. Martin Luther King said that injustice anywhere is a threat to justice everywhere.

"I met a lot of folks who were just the type I admire: exuberant, thoughtful, creative, aggressive yet gentle, and happy."

I propose that unless we are ready to be true and loyal to the truth, and if we do not make our internal, spiritual development the topmost priority, we are bound to find ourselves climbing a ladder that is resting on a wrong wall. Materialism is a lie, a disease, an inconsistency, it is gross, and it hurts. We ought to endeavor for an achievement that is categorically different. First things first, right?

Now I am reminded of something Tolstoy said, “There can be only one permanent revolution—a moral one: the regeneration of the inner man.”

Sukadeva Goswami, the speaker of the Srimad Bhagavatam said, “What is the value of a prolonged life which is wasted, inexperienced by years in this world? Better a moment of full consciousness, because that gives one a start in searching after his supreme interest.”

I think it is great that the Occupy movement is addressing a good number of lies and inconsistencies. I also hope that the movement does not stop at the mere economic level.

A vedic proverb says, “satyam jayate” – “truth is victory.” Or, as a friend of mine said, “truth works!”

Federal Courts Give Citizens a Few More Days of Freedom