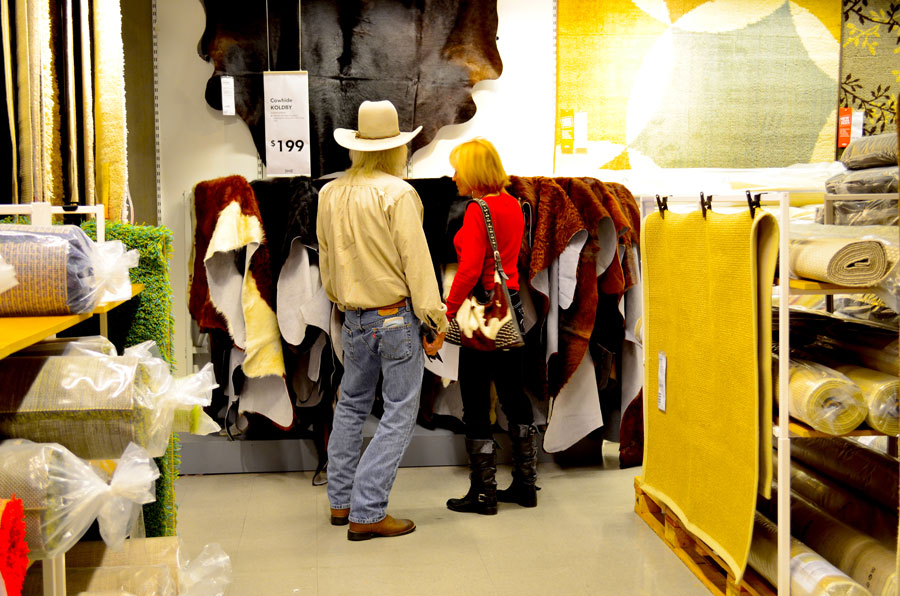 Nirmal Patel:
That yellow carpet, instead of hanging it by clips, they could have just put it over the stand.

Patrick Duffey:
Funny, I just left the IKEA store in Costa Mesa. What saddens me most here, is that the hide, the fur, so priceless to its owner, is sold here for only a few dollars. It will go on the floor for just a few months and then disappear into to the dump along with the pain and suffering caused by its creation/production. Who is the animal; who is the greater being.?

Matthew McManus:
Taking advantage of the results of fruitive activities, the gross materailsits are relegated to the status of sophisticated animals by dint of their symbols of status. Work hard like an ass for no happiness, but only suffering – it is a philosophy no sense gratifier, or sane man, would follow; yet ironically, that is going on in the name of unbridled lust under the flagship of economic development with its manifold branches of societies seeking to relish different varieties of that which is chewed.

Jeannette Franks:
@ ryan, good news is that is fake fur. I took a look at it when I was at IKEA last as I was pretty grossed out. What’s wrong,with this picture? Rednecks perpetuating a stereotype.

Ondrej Tencer:
Somebody is not wearing just their own skin.

Anonymous:
They better pick the one with least hair. (Caitanya Caritamrita: “Animal-killers are condemned to rot in hellish life for as many thousands of years as there are hairs on the body of the animal they kill.)

This is your humble website administrator, a friendly ghost.

A World of Names

Revelations of the Self-Realized