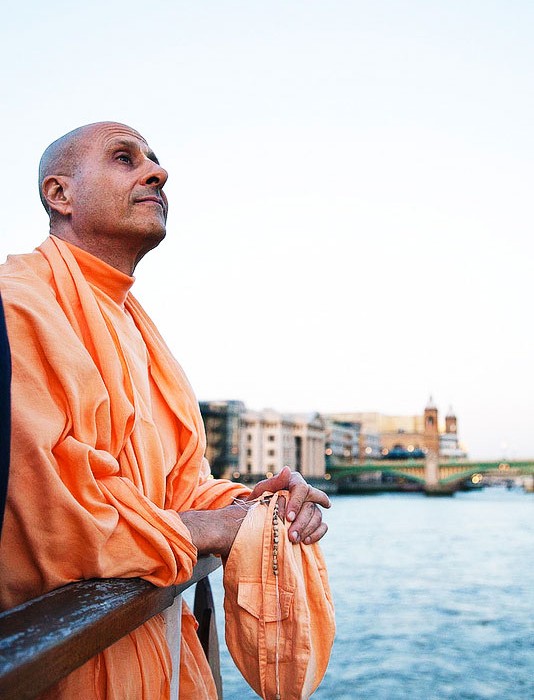 A crippled economy and a polluted environment plague our social body. Both largely stem from the same core disease — pollution of hearts. Blinded by distractions, one can forget how to invest in what awards a meaningful, fulfilling life.

Parallel to our vast strides in technology, there is a dangerous rise in unemployment, foreclosures and degrading education. Millions of people are stricken with hopelessness and strife. Sadly, in the name of progress we have polluted the air, water, soil and the food we eat. What can we do? The following is a story about an encounter I had with someone who cared.

It was winter in New Delhi when the days are mild and the nights are biting cold. New Delhi’s wide roads are lined with massive government buildings – the older ones built by the British perhaps a century back with stone pillars, ornate statues and vast lawns. Others built after independence in 1947 are adorned with Indian style arches and domes.

I rode toward the airport. Monkeys appeared everywhere, scampering along the boundary walls. At the crossroads we passed circular islands of grass and trees surrounding memorials for the country’s freedom fighters. The streets were congested with cars, trucks and motorcycle rickshaws spewing out trails of exhaust fumes. Overhead a murky cloud of smog hung in the sky and reduced the sun to a gray, lifeless ball. The fumes were thick, the smells toxic, and they sat on our tongues like sour lozenges. On the roadside an elderly man squatted cross-legged with back erect, performing pranayama, a yogic breathing exercise. He vigorously inhaled and exhaled. I wondered if it did him more harm than good.

We crossed a bridge over the Yamuna River. I looked down and remembered 30 years before, when I first came to India, that under the same bridge the Yamuna flowed in her full glory. Now, she looked plundered and crippled. What was once a pristine river had now become a thick, blackish liquid, foaming bubbles, and a current so lame she barely flowed.

When I reached the airport and was waiting at the gate for my flight, a lady informed me that sitting close by was the Union Minister for Environment and Forests. She wanted to talk to me. I obliged.

The minister stood up and greeted me, “Namaste Swamiji.” After a pleasant exchange she suddenly challenged me with a passion.

“What are you spiritual leaders doing about the ecology?” She was very serious.

“Every second the air is being saturated with cancerous smog,” she said. “Tons of raw sewage and toxic waste are dumped hourly into rivers where millions of people bathe and drink. The earth is being stripped of its forest and has become a dumping ground for deadly waste. The world is on the brink of ecological disaster while all of you spiritualists are praying, meditating or chanting. What is all your devotion doing to save the ecology?”

Her concern was real and impassioned. It was exciting to see that depth of concern from a powerful leader over an issue that affects us all.

“Yes, the environment is everyone’s responsibility,” I responded, “and I sincerely admire your tireless commitment. The spiritual leaders I know believe that along with passing laws and doing the cleaning work, we need to address the root cause of the problem. If a person is covered with boils, the symptoms must be treated, but unless the cause of the problem is addressed, the boils will recur. In the case of boils, the cause may be a disease in the blood. The root of cause of pollution in the world is pollution in the heart.

“Toxic greed has contaminated the minds of human society. The environment is simply an external manifestation of the ecology of the mind. Greed is an obsession, an addiction. It can never be quenched. The more it gets, the more it needs. Greed hardens the heart and fools us into rationalizing cruelty and justifying crime. Greed induces envy, divides families, provokes wars and blinds us to our real self-interest. Greed for money, power, fame, sex — the world is ravaged by greed. It is practically an exercise in futility to attempt to clean the environment when politicians are corrupted by bribes, industrialists pollute rivers to maximize profits and scientists put aside their ethics for funding.

“The Bhagavad Gita states that greed is a symptom of avidya or ignorance that covers the natural virtues of the true self within us. I’m sure you would agree with me that most people are not bad spirited, but due to a lack of awareness they may be destroying the environment, not understanding that what may seem convenient, like dumping industrial waste into a river, is actually killing fish, animals and people. So along with the pollution of our rivers, we must give attention to the pollution in our hearts. If you successfully clean the air, the sky, every river and every ocean, it is for certain that people will pollute them again unless they reform the ecology of their hearts.

“Spiritual life is the science of cleansing the heart and tasting the joy of living in harmony with God, each other and nature. It begins with cultivating good character, the willingness to make personal sacrifices for a higher cause, to make the right choices even in the face of temptation and fear, and put concern for the well being of others as a priority.

“How to do that? All of these virtues can spring from bhakti or spiritual love. The Bible teaches that ‘the first and great commandment is to love God with all one’s heart, mind and soul.’ And the natural result of that is, ‘to love your neighbor as yourself.’ Nature is also our neighbor, she is alive with rights like everyone else, but too many people don’t see nature that way. The Vedic scriptures tell that the most simple and powerful method of cleansing the ecology of the heart and awakening this dormant love within us is to chant God’s names. In my tradition we chant the names of Krishna.”

“God has empowered all of us in different ways and if we agree on what the real problem is, then we can all contribute our part of the solution. The well being of Mother Earth is everyone’s problem. It is crucial for leaders in all fields to serve cooperatively.”

At that point the minister was called to board her flight. She thought for a moment, then stood up and smiled saying, “Yes Swamiji, What you say is true. We all need to work together.”

She was right to take me to task. Religious and spiritual leaders should be held accountable for environmental activism, not only because they have access to large communities and can influence votes but because service is integral to religious and spiritual life. Reducing carbon emissions is important, but it is shortsighted if not coupled with reducing the toxic emissions from our heart; and that is something spiritual leaders are supposed to teach and something all thinking people, regardless of their beliefs, should practice.

We should honor Mother Earth with gratitude; otherwise, our spirituality may become hypocritical. The earth nourishes us with every necessity for a prosperous life. When, on a massive worldwide scale we plunder her oil, destroy her forests, pollute her resources, torture and kill her animals, soak her with the blood of her children, exploit one another and trample her with immorality, there will naturally be devastating consequences.

We should honor our mother and respect all of her children as our brothers and sisters. Otherwise, we may force her to react. Humanity has reached a critical crossroads. We have made monumental progress in technology, medicine, science, academics and globalization but if we do not use them with compassion, what will be our fate? The dire need is at hand to take responsibility as caretakers of the helpless and live as dedicated instruments of God’s love.

While still a young man growing up in a Jewish family during the Vietnam war, Radhanath Swami's thirst for meaning and fulfillment took him on an amazing spiritual quest. Hitchhiking from Crete to India, he embarked upon a spiritual journey searching for truth in a world often ridden with hypocrisy and conflict. Upon meeting many esteemed spiritual leaders of the time, he eventually decided to take on the life of a monk in the Vaishnava order. Today Radhanath Swami travels regularly throughout India, Europe and North America, writing and giving spiritual discourses.

A Part of You